The Dutch Tiny House movement has recently reached a new milestone: the first Tiny House On Wheels (THOW) has received a permanent environmental permit! Owner Oscar built his mobile home together with a good friend in Belgium and will live in his unique house in Den Helder. We were of course very curious to know how Oscars Tiny House passed the assessment against the Building Decree and spoke with him and architect Antti Hänninen.

Liesbeth and Oscar met through a Belgian-Dutch organization for creative consultancy, in which they worked on several projects together. One fine day they decided to take on a completely different project: to build a Tiny House for each of them. Oscar’s house was the first to be built and next July 1st they will start building Liesbeth’s Tiny House together. Tiny House Belgium offers self-builders a workshop and tools for rent, and the two friends chose to build their homes here.

There is music in this Tiny House

Oscar had never expected to get a lot in the project in Den Helder. He was 5th place on the waiting list. For various reasons, people left the project and now his Tiny House is standing there: in the middle of a sea of green, the first self-built Tiny House that is ready to be occupied in Den Helder. The house was driven all the way from Belgium to Den Helder with a ‘depannage’ (tow vehicle). 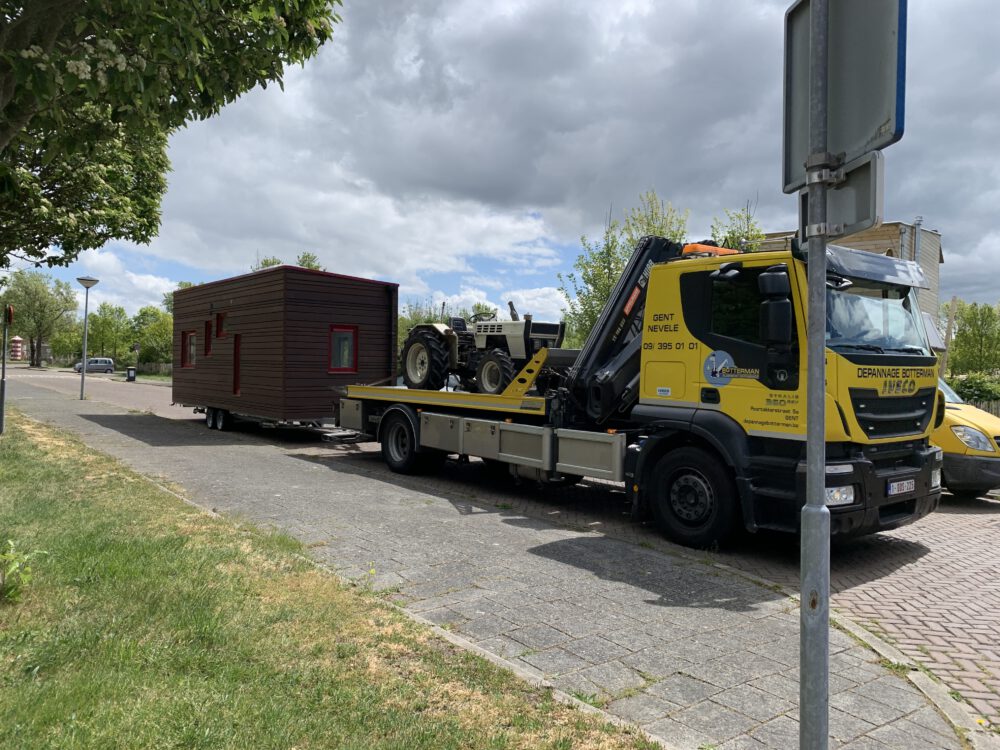 Oscar came up with the design of the house by himself. There is a charming story to tell about the special facade cladding. It is made of planks with different profiles and widths, made of Ayous wood. Oscar did not want a standard facade with all the same planks and one day he got a brainwave: what if he used music as a pattern? The facade of his Tiny House depicts the rhythm of the chorus of the Dutch winning Eurovision song “Arcade”. Oscar made the choice mainly because he liked the lyrics of the song so much. With its sixteen windows in different sizes, with cheerful red frames and the musical façade cladding, the house has become exactly as Oscar had in mind. 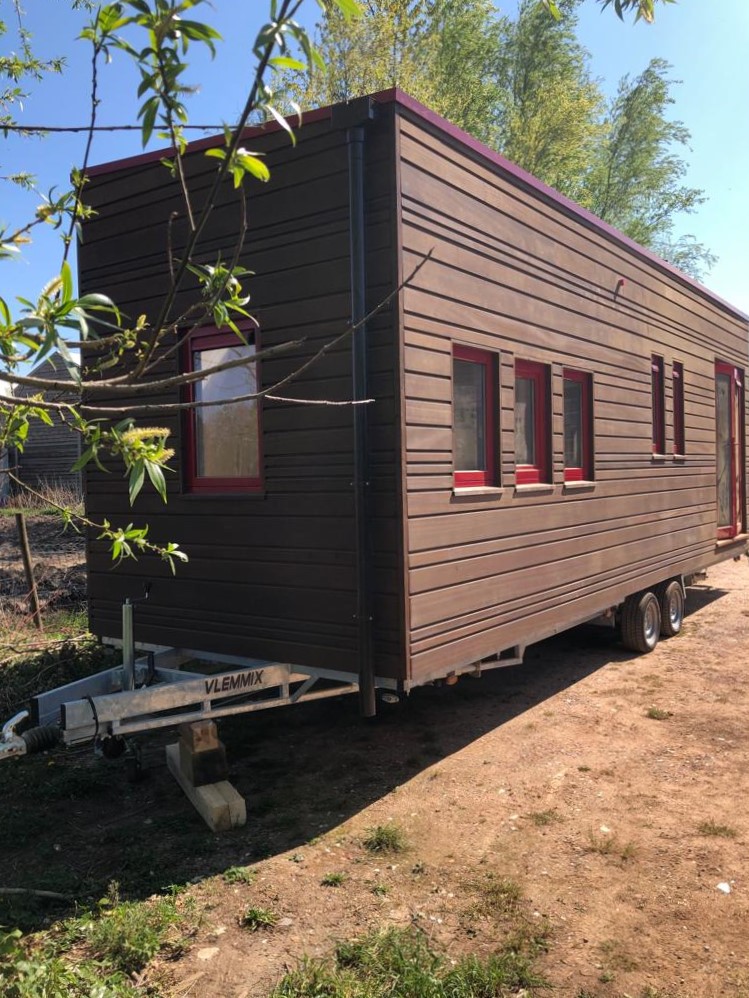 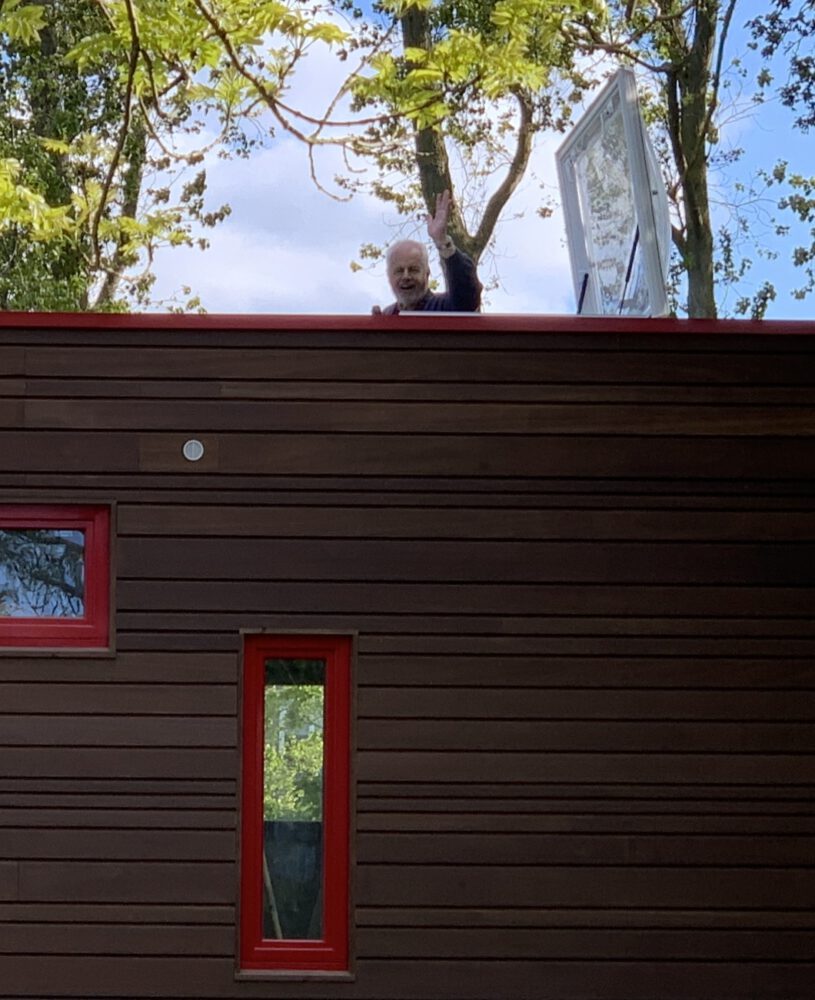 To assist him in making his design workable Oscar has enlisted the help of architect Antti Hänninen, in advance of the environmental permit application. Where many Tiny House projects are of a temporary nature, Oscar has secured a place in the permanent Tiny House residential area De Falgatuinen. A project of the housing association Woningstichting Den Helder. As a result, the house must also pass the strictest assessment against the Building Decree, that of regular new construction instead of temporary construction. Antti has translated the design to the municipality so that the Tiny House could be licensed and it would be operationally feasible. 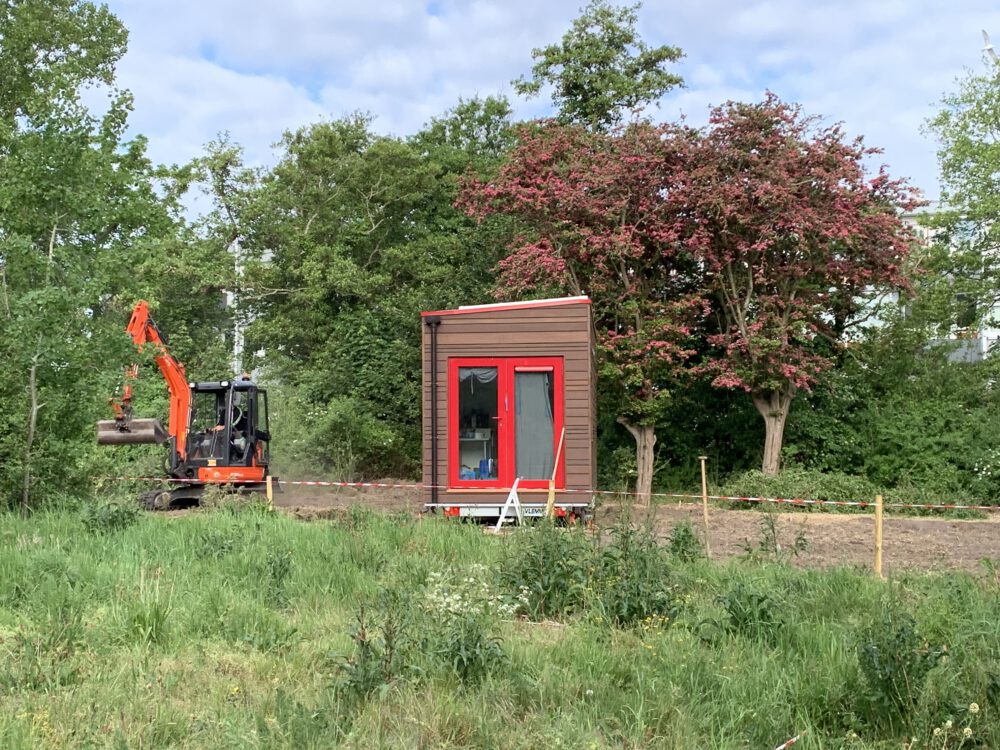 Anyone who delves into the regulations surrounding living in a Tiny House will encounter a number of bottlenecks. In the Netherlands, one of them is the Building Decree 2012. A thick tome of rules that a building and therefore also a home must comply with. With a living area of ​​up to 50 m2 which we consider the maximum size for a Tiny House, with a little effort and creativity you can comply with the Building Decree for new construction. But getting a permanent environmental permit for a Tiny House On Wheels? That is quite a challenge. The Building Decree is based on old-fashioned ideas about housing and does not take the desire for living small into account. Especially RC values ​​are difficult to achieve in a THOW because the walls quickly become too thick. Resulting in having too little interior space to meet the performance requirements for a minimum usable surface. The width of the trailer is the limiting factor here. 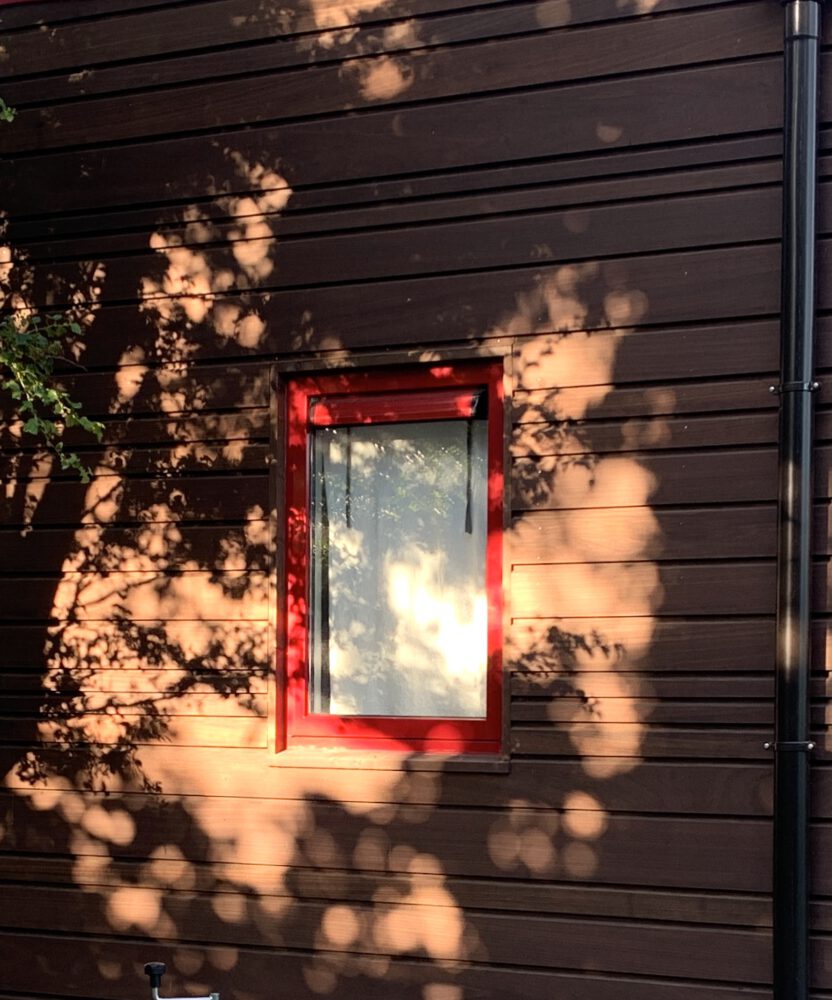 In order to obtain a permanent environmental permit for a THOW, Antti has drawn up an equivalence argumentation for no fewer than three different performance requirements from the Building Decree. One of them revolved around the floor insulation. For the insulation value of the floor the Building Decree assumes that the floor of a house is at ground level. With a THOW, the floor is on a trailer, leaving an open space underneath it. This means the floor is too strongly ventilated. As a result, you have to meet a higher insulation value. The smart solution that Antti has found for this is to make a kind of skirt around the house that shields this space, so that the wind can no longer blow underneath. For example, you can consider this space as a crawl space and a regular / lower insulation value is required.

In addition, equivalence arguments were needed for the energy performance, the non-use of sewerage and the living space. The performance requirements for the minimum living space indicate that the room must be at least 2.4 meters wide. The underlying idea is that you can then put in a table with four chairs and still have enough space to walk past the table. With a THOW of 2.55 wide, after deducting the walls with sufficient insulation, it is not possible to have 2.40 meters of interior space. The fact is that in this THOW usually two people are dining, but smart solutions have been implemented in the THOW so that four people can also dine. A table can be foldable or extendable. The user comfort is therefore no different from what the Building Decree intended. 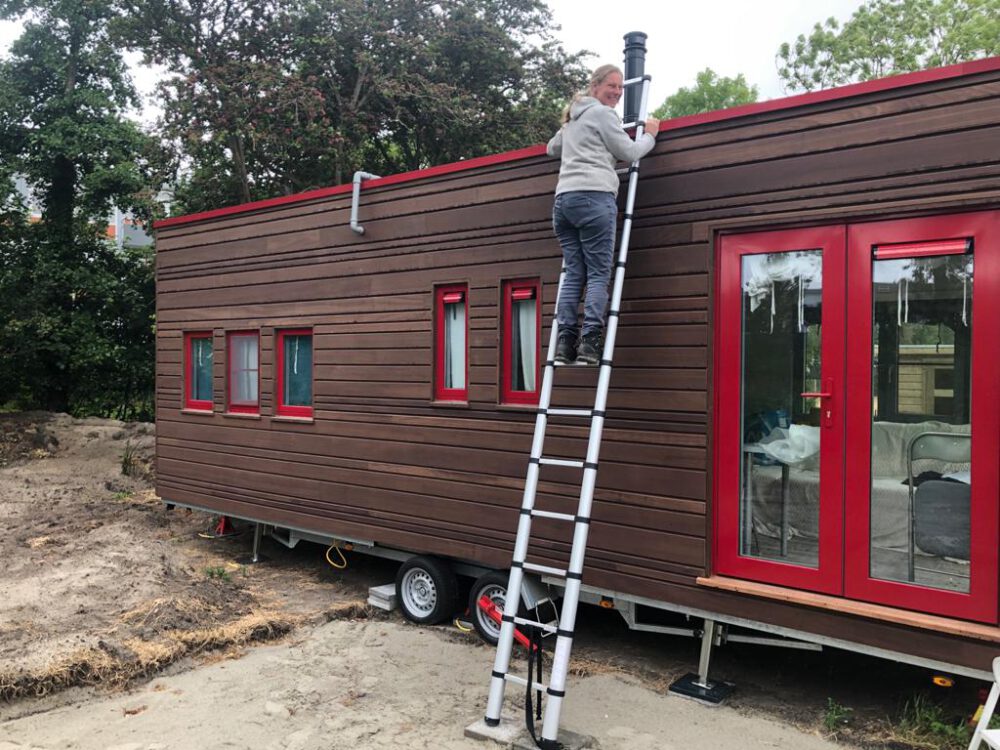 The licensing process is quite complex. There had to be a plan for the whole lot, Antti and Oscar decided together where exactly the Tiny House should be. In reality this turned out not to be feasible because there are a number of trees on the plot and the Tiny House had to be moved a few meters. However, an amended drawing had to be submitted for the permit. According to Antti, they now have established a good contact with the permit officer of the municipality. Antti: “There is a very constructive atmosphere with the official involved, and that has been the case throughout the licensing process. While the Tiny House construction was new in the beginning, the municipality of Den Helder is now a municipality that knows what it is doing when it comes to Tiny Houses.” 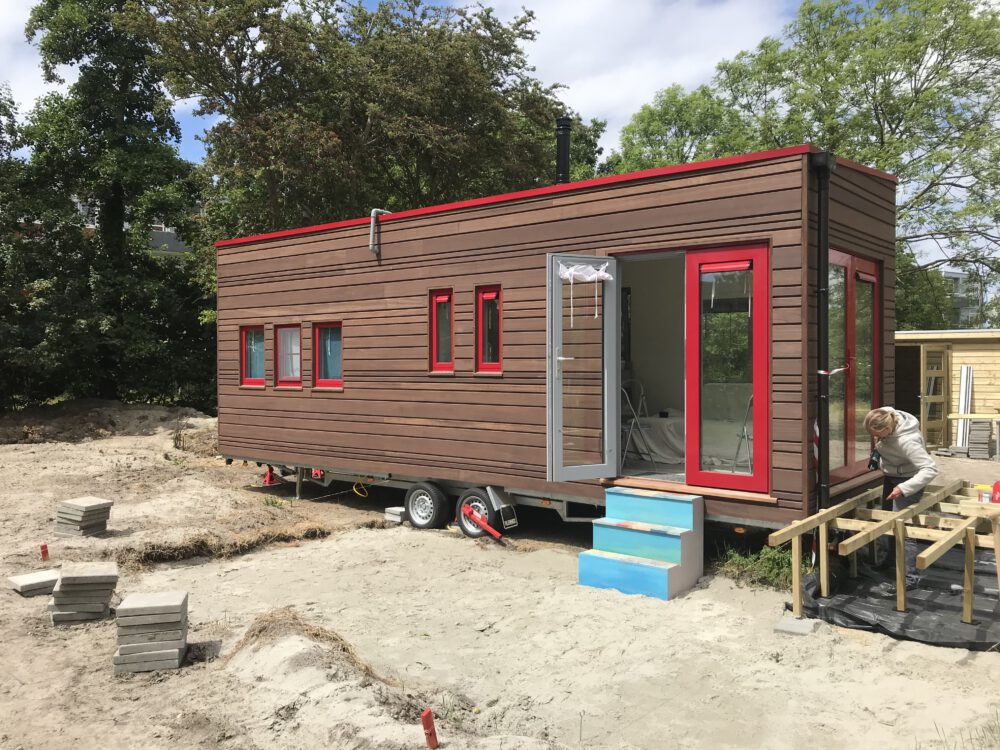 A lot of experience has been gained, which will considerably speed up the permit process for the following Tiny Houses in Den Helder. But this experience can also be useful in other places in the Netherlands where Tiny House projects are being developed. Antti is happy to support other future Tiny House residents in the design phase and with the permit application.

Thank you for taking the time to answer our questions so comprehensively! We wish Oscar and his wife Thea much joy living in Den Helder. And Liesbeth and Oscar, best of luck with the construction of Liesbeth’s Tiny House!