“How can a legal roadmap for municipalities be developed that makes the realization of (temporary) Tiny Houses possible?”

Suzanne Wassenaar set to work with this research question for her graduation research. As a Real Estate and Brokerage student in Enschede and as a lover of Tiny Houses, she had several reasons to choose this subject. The result is a legal framework that should make it easier for municipalities and initiators to realize Tiny Houses.

But Suzanne learned many more valuable lessons during her research, which she says are much more interesting than the step-by-step plan. 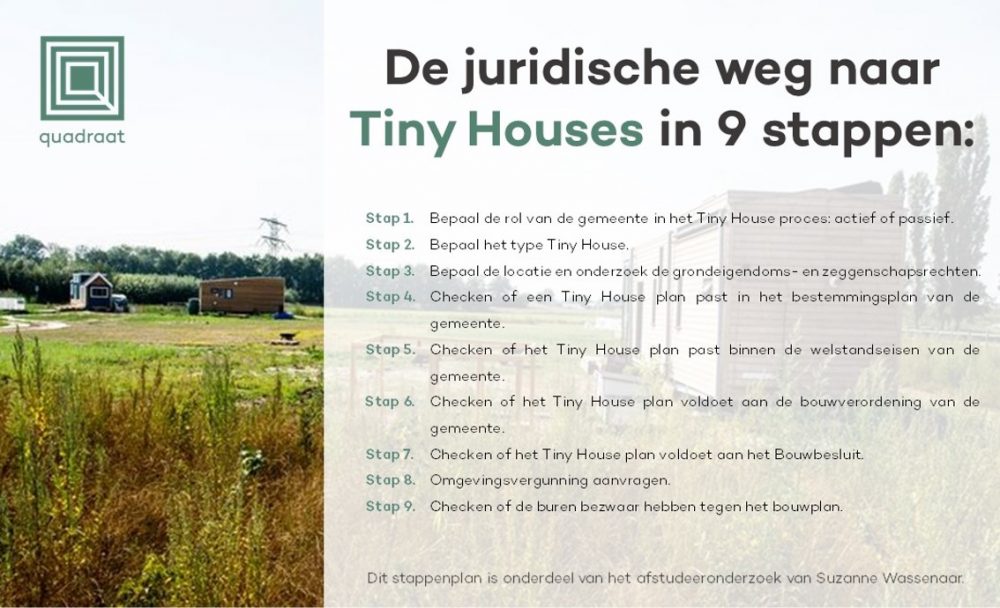 Suzanne recently successfully completed her Real Estate and Brokerage study: she graduated with an eight out of ten for her graduation thesis. She can now call herself a real estate expert, with knowledge from land development to transformation. In the last year of her education, Suzanne did an internship at Quadraat Project Management, where she now works. The choice of the subject for her graduation thesis coincided with her love for design, her interest in the legal side of real estate and her desire to live in a Tiny House herself.

Due to the travel time to her internship address in Veenendaal she temporarily moved back in with her parents. She noticed that she longed for a place of her own. A Tiny House appealed to her because of the cost aspect and the minimalist lifestyle. Moreover, as a child she already wrote in friends’ books that she wanted to become an architect and she used to build small houses from Lego bricks. Designing her own Tiny House that is all about her, while using the space as efficiently as possible, really appealed to her.

She attended an informative gathering about Tiny Houses in Barneveld and noticed that the movement was still very much in its infancy. Much was still unclear, particularly with regard to regulations. The subject for her thesis slowly began to take shape.

It soon became clear that every municipality looks at Tiny Houses differently and implements the projects in its own way. This involves a lot of valuable time, which can be saved by using the legal roadmap.

The legal roadmap clearly shows the broad outlines of the options per type of Tiny House, ownership of the land and legal options within Spatial Planning. It also indicates the costs associated with such a development when it comes to deviating from or changing zoning plans. The roadmap is a tool for municipalities, but housing associations and private initiators can also make use of it.

Realizing a Tiny House housing project is quite a complicated task for citizens. By using Suzanne’s research as background information, the initiator learns more about the applicable regulations and the possibilities for the specific situation. In this way the initiator can better enter into dialogue with the municipality to discuss the options.

What Suzanne has learned during her research, which is reflected in the conclusion of her research, she finds much more interesting and useful than the final roadmap. In conversations with municipalities and experts, she discovered that the legal aspect is not necessarily the biggest problem. There are a whole host of problems that people face when trying to develop a Tiny House housing project. Everyone is reinventing the wheel, while they would be out much faster and cheaper if there was more cooperation.

We asked Suzanne to share her top three valuable findings with us.

Suzanne did not expect that the definition of a Tiny House would cause so much uncertainty. Everyone understands something differently by the name of Tiny House. Whether or not a second storey can be included, the ecological footprint is the most important aspect, a shed is allowed, but no larger than 10 m2, a Tiny House is no larger than 35 or 50 m2: everyone she spoke with had a different opinion. Suzanne:

“We talk about Tiny Houses, but we all talk about something different. If a project fails, it is often because the project definition was unclear from the start.”

Her supervisor from Quadraat asked if there was no national definition. The Tiny House Nederland Foundation (THN) has a definition that is often used. But if you look at the size, for example (THN sets a maximum floor area of ​​50 m2), then a house of 35 m2 in Amsterdam where space is limited is already very large. While in Oss, for example, it could be 50 m2. A different definition may therefore be required for each project.

In Rotterdam a residential location for Tiny Houses is being developed, called Keyenburg. This project is situated in a park and therefore demands are placed on the Tiny Houses and spatial design that must guarantee that the houses merge nicely into the park. Different requirements will be set for the next location in Rotterdam.

Each project is tailor made, and this also makes it complicated.

Three types of Tiny Houses are identified in the legal roadmap.

Suzanne thinks that the next step could be: creating some sort of package with conditions to choose from that a Tiny House could meet, so that you can put together the definition and do not have to brainstorm blindly. Also, where you can draw from the beautiful examples that already exist. If every municipality has to put three civil servants on such a project to find out everything, it costs an enormous amount of time and money, which is not necessary.

Municipalities view everything from the earnings model. A Tiny House project usually does not (sufficiently) meet this requirement, it offers other values ​​than a financial value. What also plays a role is the principle of equality: citizens are all equal, one should not be favored at the expense of the other. According to Suzanne, it would make a big difference if municipalities would share more knowledge. Unfortunately, in practice it appears that people like to figure everything out for themselves. A Tiny House housing project should not be a revenue model, but it is certainly possible to cover costs.

In Apeldoorn, the municipality has set up a temporary Tiny House project in which the costs incurred to realize the project must be recouped through the rent paid by the residents. The project will run for five years, with the residents of the ten Tiny Houses paying 300 euros per house in rent every month. A quick sum shows that the project must have cost 180,000 euros, which is an enormous amount of money.

The municipality could probably have saved a lot of costs if more knowledge had been gained from other Tiny House projects. In addition: with a term of ten years instead of five years, the residents would have had to pay only half of the rent per month. In any case, the rent could have been lowered.

Tiny House projects and therefore the legal roadmap are also interesting for social housing corporations. Tiny Houses can be realized relatively easily and quickly, the roadmap clarifies what is needed.

Housing corporation Rentree is developing a tiny co-housing project in the Tuinen van Zandweerd, Deventer. Tiny Houses in social housing, which are developed together with the residents. When you involve the residents and give them the opportunity to develop their Tiny Houses together with the social housing corporation, the results are satisfied residents who take good care of their homes and immediate environment.

Social housing corporations are faced with a difficult task: many homes have to be delivered and the construction prices of standard homes are currently sky high. It is a challenge to build a standard home within the rental limit. With Tiny Houses that is not necessary at all, it is really a cheaper solution that can take place in addition to the regular construction flow. They can be written off in a shorter period, for example twenty instead of thirty years. The houses are usually built by other companies and different materials are used for them than in regular housing.

The legal roadmap can certainly contribute to the Tiny House movement, Suzanne thinks. Of course then it must first be found, and this is already happening. Via LinkedIn Suzanne already received various questions from municipalities that want to receive the roadmap. The research and the roadmap can be downloaded from the website of Tiny House Nederland and at the bottom of this article. Suzanne’s colleagues, who work at municipalities, also help in the dissemination of the roadmap.

Suzanne hopes that municipalities will use her research as a reference work and therefore have to do a little less research themselves. She would like to inform municipalities that it is even more important to first start with a good project definition: “Define your plan carefully and then go into depth in terms of legal research.”

If you have any questions, municipalities can contact Suzanne. If support is required for a project, this is also possible. This also applies to social housing corporations and private initiators. For the latter group it is important to know that this is not entirely without obligation. Suzanne hopes to specialize in Tiny House area development. Two requests have already been received at Quadraat from private land owners who want to work with Tiny Housing.

Suzanne would like to see municipalities and social housing corporations look a little more lightly at these projects. It is new and therefore complicated, but there is also a lot of knowledge available, so it should not be that difficult.

Finally, she hopes that many more Tiny House projects will emerge in the near future.

We share your hope Suzanne, thank you for your time and this very useful research and roadmap. We wish you a lot of fun in your work at Quadraat as a (future) Tiny House area development specialist and of course hope that you will be able to realize your own Tiny House soon!

You can download the full research report, attachments and roadmap (in Dutch) here: