Not many people know, but a Tiny House village has emerged on a beautiful green spot in Haarlem. It is an initiative of Faro Architects who have designed a completely self-sufficient Tiny House: the TIMhouse. As early as 2016, they were able to make the then alderman Jeroen van Spijk enthusiastic about the project. Still the project took a long time to get started, before the Tiny Houses were finally built. TinyFindy’s Marjolein and Tiny House Netherlands chairman Monique van Orden visited the new residents of this green oasis with Tiny Houses in Haarlem. 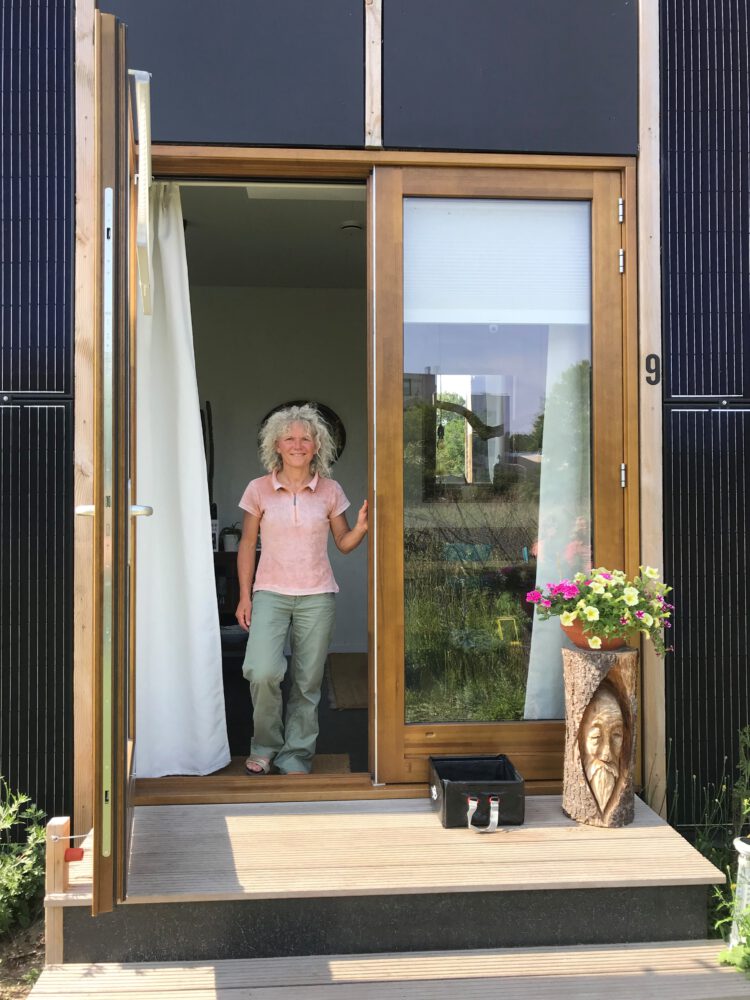 Visiting Vera and her neighbors

Resident Vera invited us to visit her, meet her neighbors and enjoy a delicious meal. That’s an invitation we gladly accepted! We were very curious about the project that had such a long lead time, and about the new model of the TIMhouse. There are also temporarily two “pilot” copies of the houses in Haarlem. The first model Tiny TIM, one of which has even been on the Tiny House Nederland Jamboree in Almere. Fun fact: it is in exactly that house where we tried out how many people can fit in a Tiny House. The answer: 83! Ultimately ten TIMhouses will be inhabited in the project. 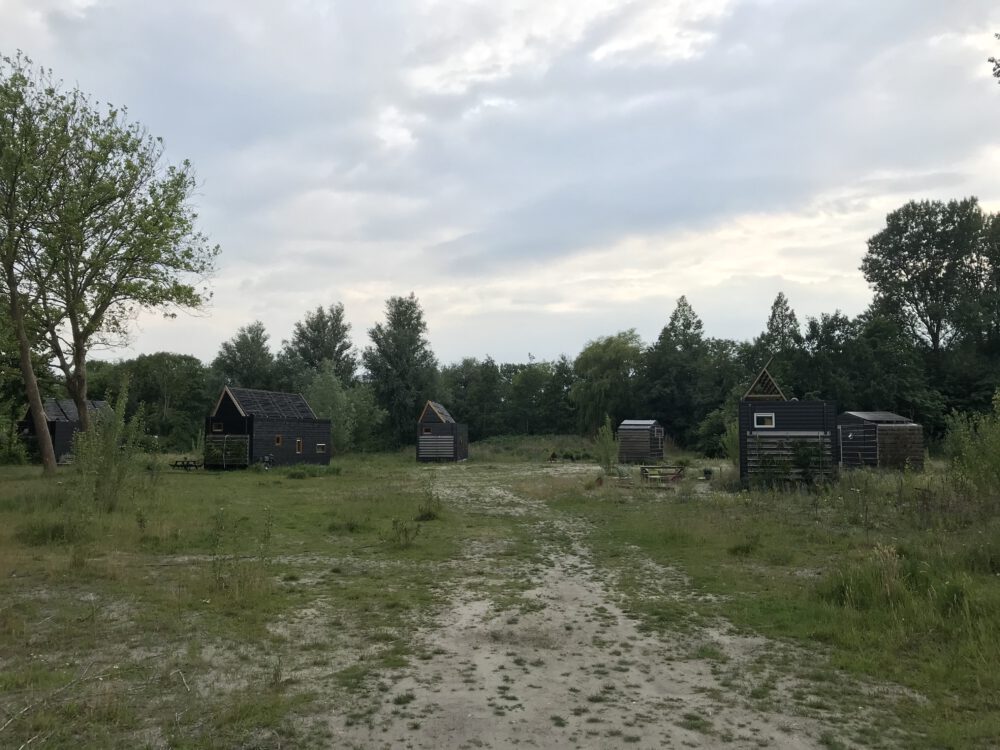 When you enter the site you will be pleasantly surprised by its spaciousness and the greenery. It really is an oasis in the city! The dark TIMhouses fit very nicely into the green landscape and there is a lot of space between the houses to guarantee privacy. The flower meadow that Vera overlooks from her garden is a feast for the eyes. Only the apartment buildings in the distance remind you that you are in the middle of the city. What a wonderful location! 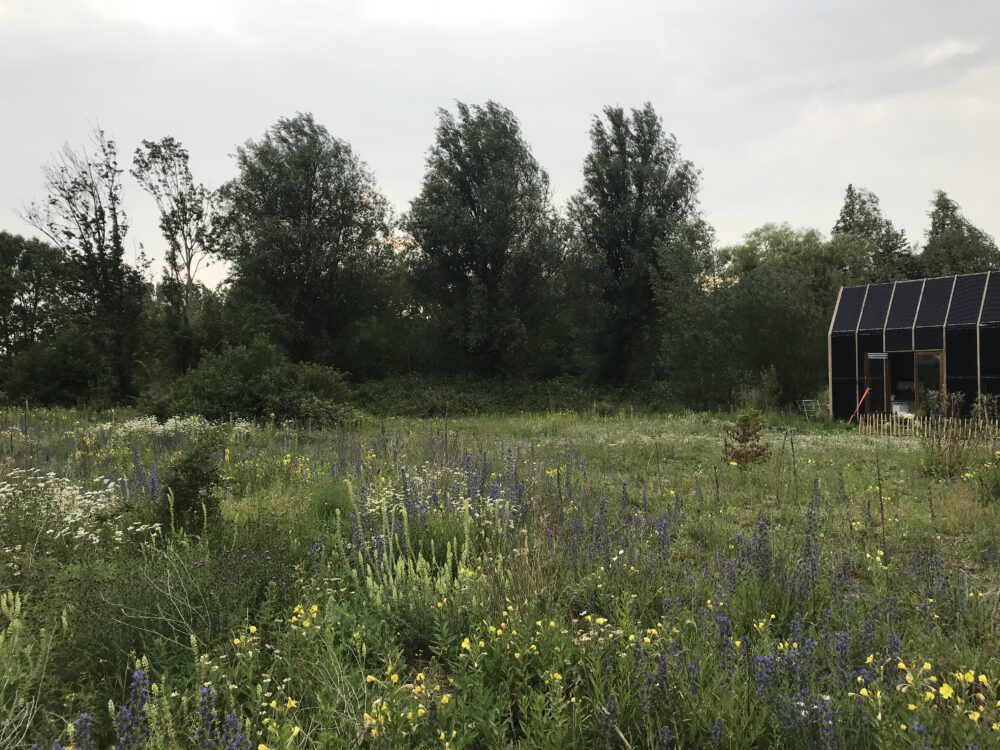 The residents’ group is a pleasantly mixed company and they are having a good time together. A foundation of co-owners is being set up to properly organize communal living on the site. Not everyone lives there yet, some of the houses are still being finished. The installations are also not yet ready for use in each of the houses. Henk has been living in one of the pilot houses since November 2018 and Vera is the first occupant of the new, larger model TIMhouse. There are currently six large models, four more will be added and then the project is complete. 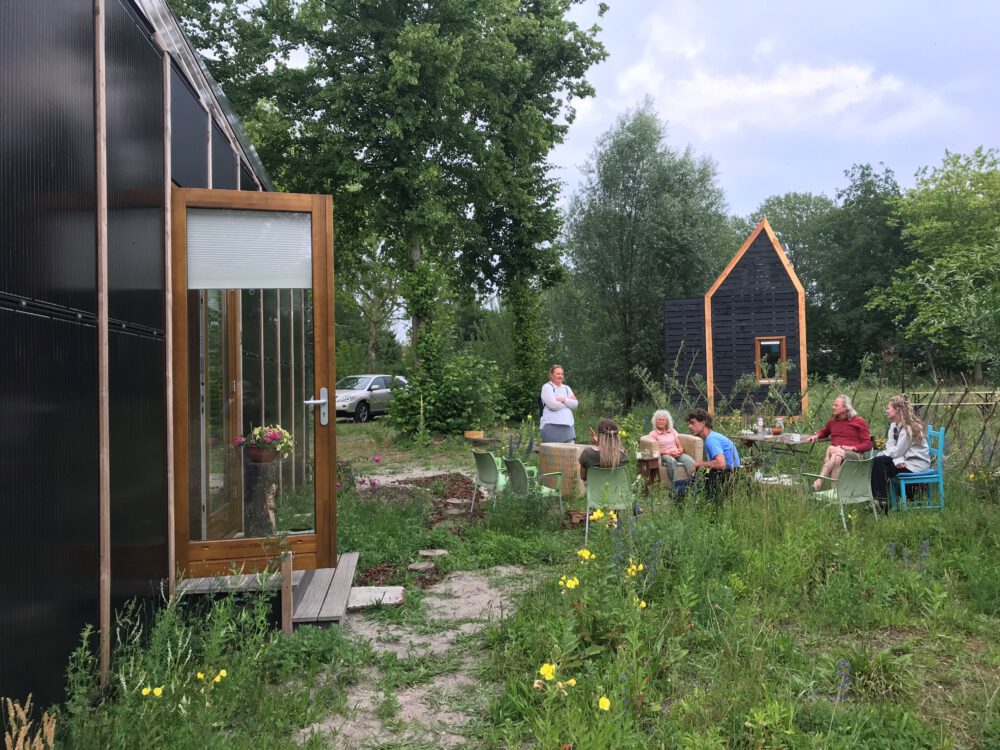 All the houses except one have been bought by the residents and the land is rented from the municipality. The TIMhouses are sold as hulls with a standard layout, but the residents can finish them as desired. The buyers can deviate from the standard kitchen and the interior can also be furnished as desired. For example, in addition to the standard sleeping loft where her son Neo has his bedroom, Hester has made a raised platform downstairs where her bed is hidden. During the day the space is a living room, at night she slides out the large “drawer” and gets into bed with ease. While you might expect it to make the room feel smaller, the height difference gives a pleasant playful effect to the house instead. With 28 m2 of living space, these TIMhouses have more than enough space to be creative and to create a very pleasant home. 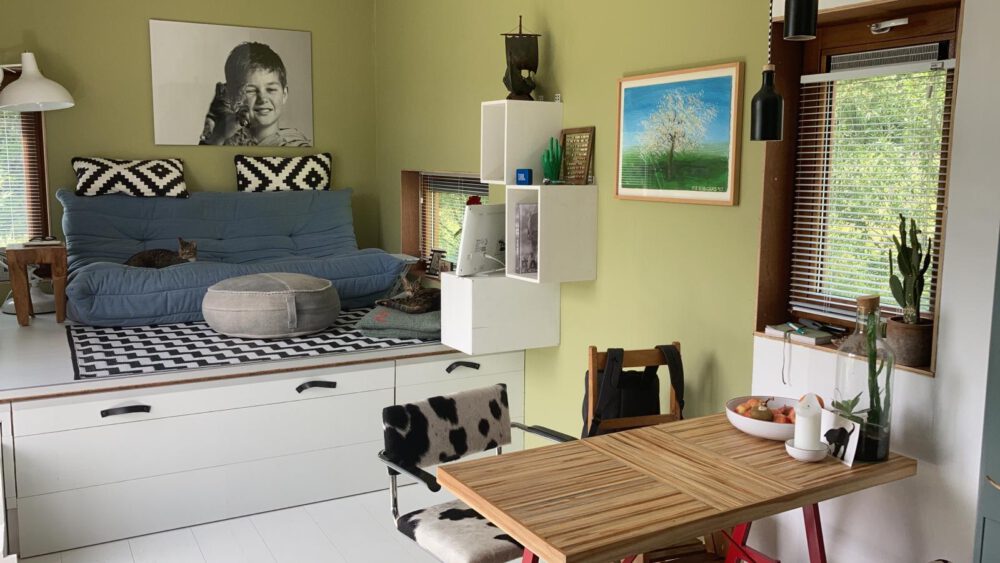 Financing the houses was quite a puzzle. A rent-to-buy construction was researched, but unfortunately this was not feasible. Due to not being able to obtain a mortgage, a lot of interested people ultimately had to back out. The Elan Wonen housing association has also bought a TIMhouse in the project for social rental. 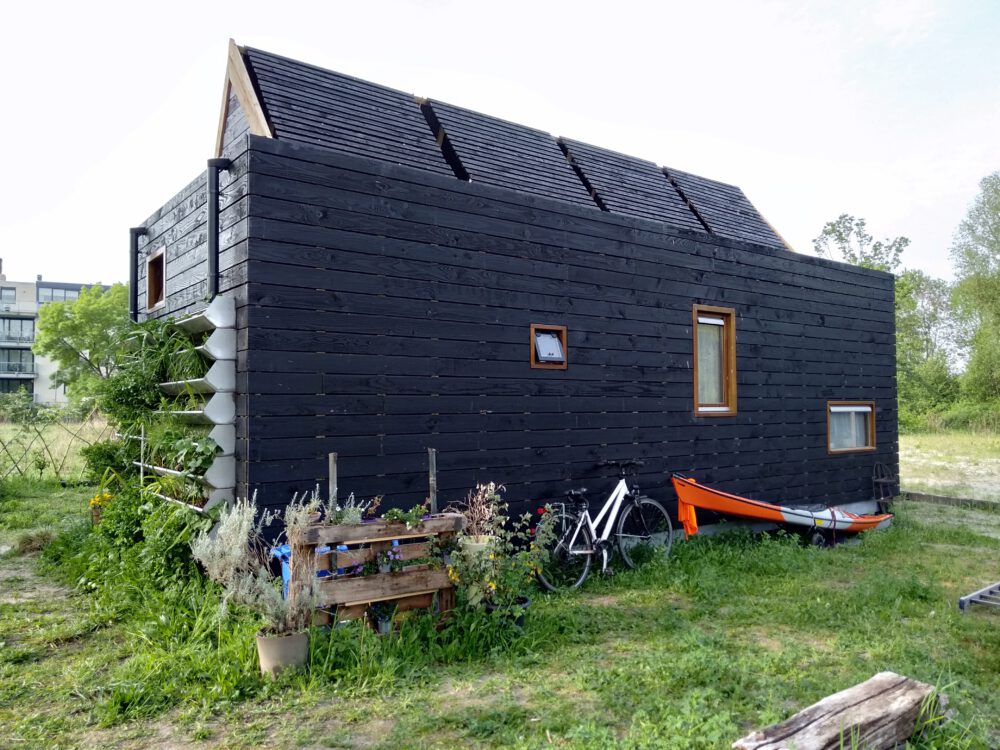 All Tiny Houses are fully self-sufficient and all electric. Vera has twenty solar panels for electricity, three of which are hybrid PVT panels for heating and hot water and eight batteries for energy storage. That may seem like a lot, but to be able to function all electric in the Netherlands in winter, you need quite a bit of capacity. A striking feature of the TIMhouse is the vertical helophyte filter on the outer wall.

By circulating gray waste water a number of times through the containers full of purifying reed and water plants, it eventually becomes drinkable water again. Vera organized the heating with an “air curtain”, which is connected to the buffer tank with a heat pump. To be able to live fully self-sufficient, a lot of electricity is needed, something that you do not have in abundance in the dark winter months. It’s manageable, but you have to be careful. “Fortunately, I don’t get cold easily.” Vera laughs. 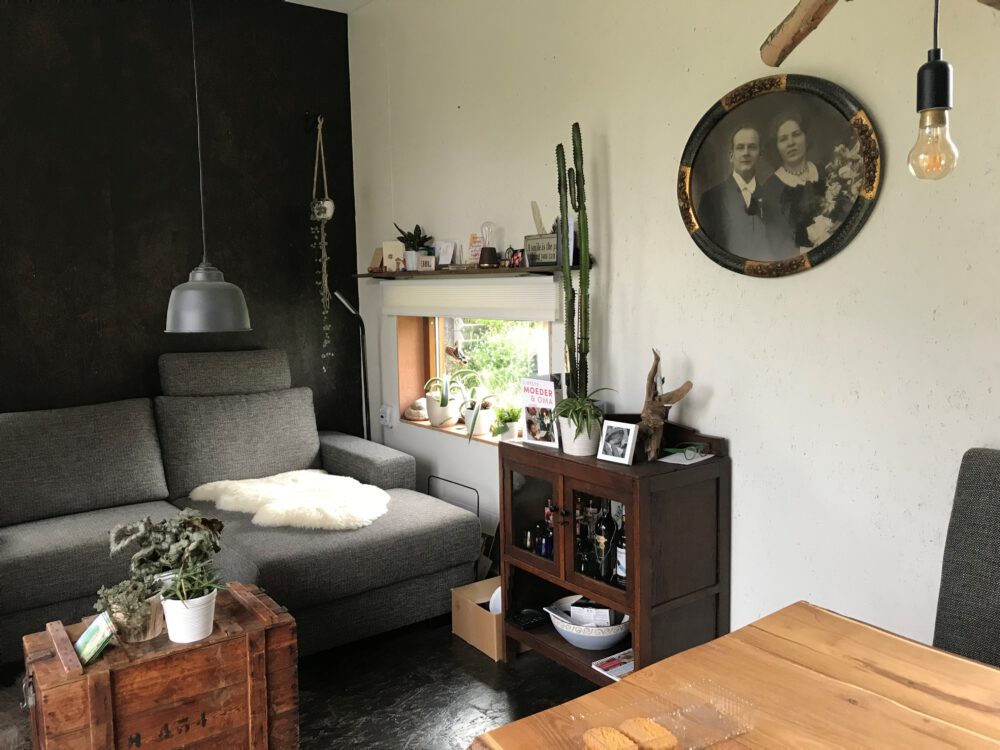 Although the municipality of Haarlem was open to starting a housing project with TIMhouses, the municipality could not guarantee a location that would be available for ten years. That was the minimum term needed to organize the financing of the houses. The solution was a land subscription that was issued in September 2018: the municipality gave a guarantee that there would be space for the houses in Haarlem, at various locations, for ten years. A number of times would have to be moved. In this way the initiative could be realized in Haarlem. The first location is the Cajanuspad, a place where a school used to be located and which has been vacant for some time. In the meantime, it has been used as an experimental garden and now it is a sea of ​​greenery, trees and flowers where ten TIMhouses will eventually be inhabited. There are currently no new building plans for the site. 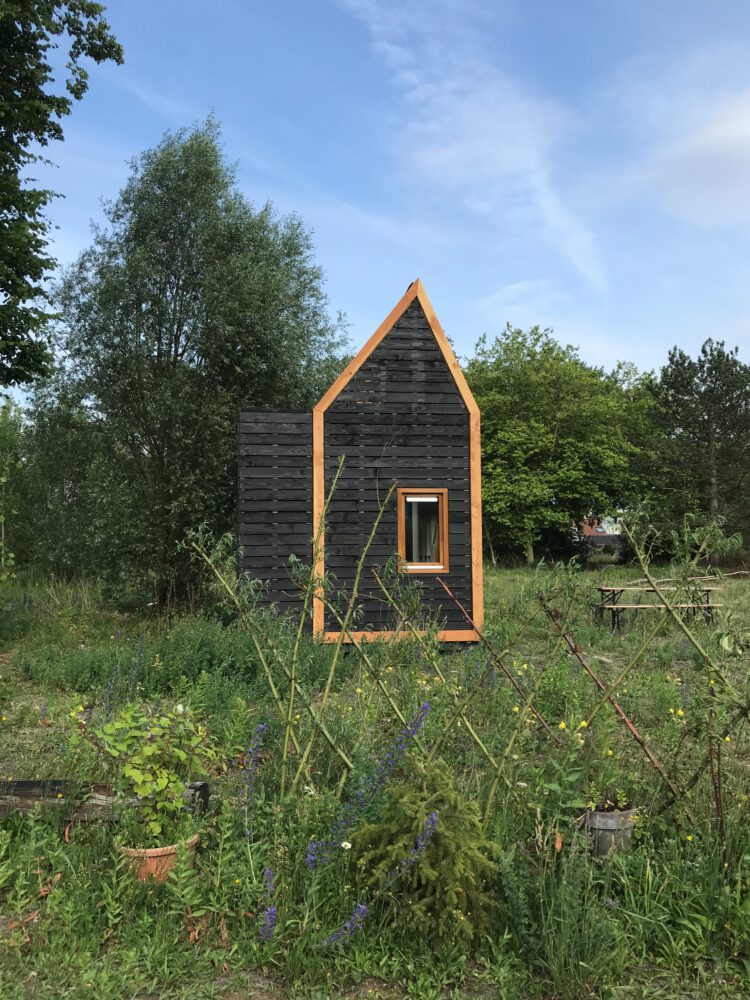 Many thanks to Vera and her fellow residents for the warm welcome and delicious meal! We really enjoyed it and wish you many years of living pleasure on the Cajanuspad!